This site uses cookies. By continuing to browse the site, without changing your cookies settings, you are agreeing to our use of cookies
From the diary of a girl in quarantine 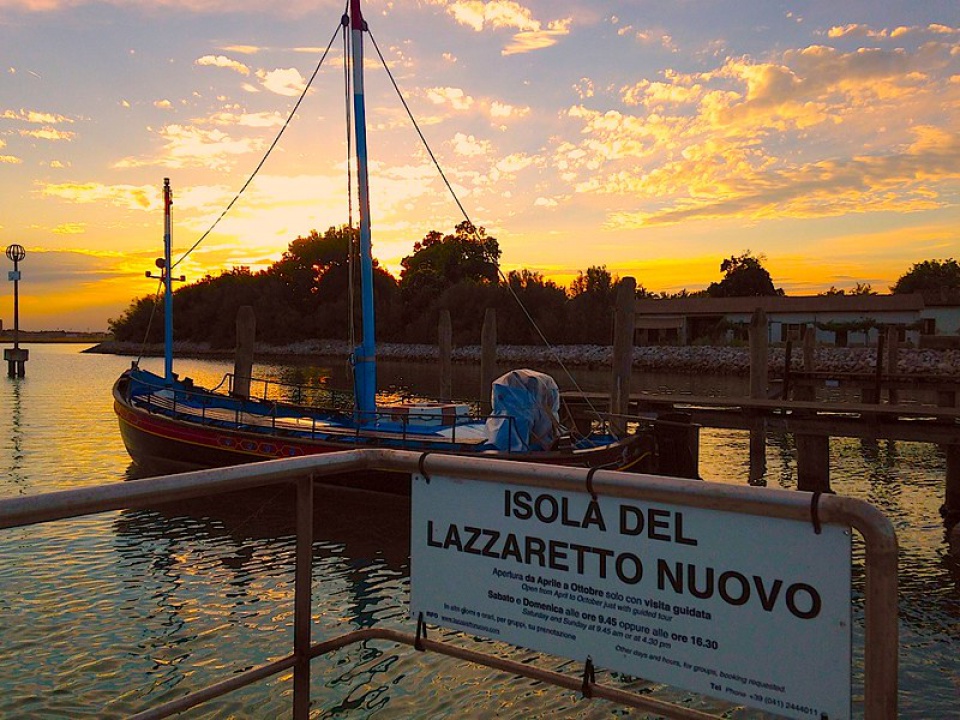 One of the happiest memory as a teen was the big snowfall of 1985 winter: schools closed, everything covered with a light, fluffy snow, no cars, only sounds the screams and the yells of us, kids busy in epic snowball fights. Muffled atmosphere I am living in these days of locked down Italy, due to the infamous coronavirus pandemic, is kind of similar, with the big exception that spring is in full bloom: as I walk the dogs in the woods, right behind my house I see white cherry-trees, yellow primroses, incredible early wild orchids and luckily, birds singing.

Life at the time of lockdown:  fridge full, yoga, time for reading, long breakfasts, working from the sofa and long solitary walking – not too bad for a quarantine, if it weren’t for the thought of people in hospitals, fighting for their lives and the worry about our jobs.

Do you know quarantine was invented in Venice? No surprise as the Serenissima Republic decisions were often smart and wise. The word stems out from the number 40 (quaranta) as, with not much scientific evidence about time of incubation of contagious diseases, the longer the better.

Europe first experienced the black plague in 1347: according to historians the Chinese Empire experienced the plague around 1331-1337, when a terrible famine caused the death of rats. Fleas opted for a different host, the human, and the bubonic plague started its journey to the limit of the whole Chinese Empire, to India and along the Silk road. It reached Caffa (now Feodosija) on the Black Sea, and abroad two Genoese galleys, full of spices it reached Constantinople, Cairo and Messina;  in November 1347 the plague hit Genoa and Marseille, a month later Corse and Sardinia and Ragusa (Dubrovnik), Pisa and Venice in January 1348, Languedoc and  Florence in February, Mallorca in March, Barcelona, Valencia, Bordeaux, Rouen, Tirol and Bavaria in May, in full summer the plague had reached Paris and London and most of the German towns. Sound familiar how quickly it spread out? For Europe it was a disaster: about 25 million people died , almost one third of the entire continent population.

Think of COVID-19 and the way it started its journey from China, on flight, business class probably, and yet, history repeats. Hopefully not in terms of human losses.

Medieval Venice paid its toll and learned the lesson: the Doge’s council instituted the Health magistrates which established the quarantine to all ships, arrived from various Mediterranean and far east ports, and had to anchor along lagoon channels far from the city.  Venice also invented the first hospital for the infectious diseases. The first one was in the island of Santa Maria di Nazareth (now Lazzaretto Vecchio), briefly called nazareto and later distorted in lazaretto, maybe with regards to St. Lazarus. Soon it was not enough for a city that started to count about 350.000 inhabitants and a bigger island on the north east was destined to become the city lazaret: the island of Lazzaretto Novo (the new lazaret).  Now the island is an open museum and offers an interesting occasion to do an historic and naturalistic walking, at just 15 min boat from city center. The restored main building on the island, called Tezon Grande, measures over 100 mt in length. It is the second largest public building in Venice, second only to Arsenale’s ropery, and it still preserves many writings and original wall paintings. These artefacts and documents record in extraordinary details the presence of merchants, the role of “bastazi” (porters) and guards of Magistrato alla Sanitá (Healty authority of Serenissima). These documents account a fascinating, lively ancient world, stories of traders and sailors from Constantinople, Nauplia in Peloponnesus, Alexandria, Cyprus.

The island of Lazzaretto Novo can be visited privately, upon request: our proposal includes both an archeo-historic and a naturalistic walking tour. Tour can be completed with a visit to the vineyards of St. Erasmo island with a fabulous gourmet picnic lunch among the vines (when all this will be over!). Enquire here

PS: At my Alma Mater, Professor Carlo M. Cipolla was one of those “totem professor” whose books you could not skip to read, although he had left Venice for Berkley, many years before I enrolled at Cà Foscari, as a BA student. Cipolla’s studies on economic history are considered fundamental and cover a broad range of social and economic history fields.  Later in his academic life he was the first to study epidemics and their economic and social consequences on humanity. He wrote many essays and I suggest you to read one, as Cipolla is rigorous with facts and numbers but his style is also witty and charming, full of humanity, a joy to read. He also wrote two small essays in English, in a form of academic scherzo, and printed them privetely to become a Christmas present for his faculty fellows. The two essays were later translated in Italian and published in a booklet, Allegro Ma Non Troppo, which became a bestseller. In English, the two essays are published separately but I really recommend you to read them both, a formidable antidote to idleness and depression in these difficult moments - here's the links:  Pepper, wine (and wool)          The Basic Laws of Human Stupidity