This site uses cookies. By continuing to browse the site, without changing your cookies settings, you are agreeing to our use of cookies
Venezia and the Veneto

A barely 50 km north of magic Venice, a corrugate pre-Dolomite small area, stretched between Valdobbiadene and Conegliano, is the scenario of the perfect cycling adventure that awaits you. Following a sleepy river, we’ll make a foray into Treviso and from there we’ll reach medieval Follina. We will pedal the Prosecco rolling hills from Conegliano to charming Asolo, onto Bassano del Grappa and medieval Marostica. This region is the home of Radicchio, Asparagus, Risotto and Tiramisu, and great wines too, so naturally the culinary adventures equal the extraordinary scenery.

We rendezvous in Venice and after a short transfer we’ll start our ride along sleepy and emerald Sile river onto Treviso, a pearl of a town: cobbled lanes, arcades under medieval frescoed façades, canals with small bridges, small cafes where to indulge in the morning rite of cappuccino with a croissant or the pre-dinner unmissable spritz or a prosecco by the glass – we are in the capital of Prosecco land, after all. After lunch, a 35 min transfer will take you to Follina, leaving time to visit The Abbey of Follina, one of the most celebrated monuments in the area (was founded in 1150), which lies few steps away from our hotel.

After a delicious breakfast we’ll start biking, out of the hotel door, into the heart of Prosecco hills. We’ll reach Serravalle, a perfectly preserved medieval district north of Vittorio Veneto, for a quick cappuccino. We’ll then make our way into Rolle and reach a cozy relais where we’ll enjoy a delicious lunch with a view. Replenished, we will head down towards Follina on a sublime descent.

This morning our ride starts from the hotel door and we’ll cycle towards the western side of the Prosecco Hills. We’ll make a foray into Santo Stefano, a tiny village made famous for the Cartizze wine (Prosecco Superiore), and Valdobbiadene, the town of Prosecco Superiore par excellence.  After a barely 50 km we’ll reach Asolo, a medieval town called “The City of a Hundred Horizons" for its settings, between the open plain and the high mountains’ backdrop. Standing under its fortified Rocca, beautiful Asolo looks almost like it’s suspended between the earth and the sky. Later today, after some relaxation by the pool, we’ll gather at cocktail hour on the stunning hotel’s garden.

The next morning, we’ll begin our ride straight from the hotel and bike through the rolling hills of Colli Asolani towards the Palladian Villa Barbaro, an excellent example of 16thC Venetian art. Thanks to its beautiful lines, symmetry and harmony, as well as its excellent state of preservation, the Villa is one of the architect’s best-known works.  After lunch in one of the numerous local trattorias on the foot of the Asolanian Hills, we ride back to hotel.

Today we ride straight from the hotel to Bassano del Grappa, a town famed for its historic bridge. Stop for a mid-morning cappuccino and off we are to reach Marostica, a perfectly preserved medieval walled town. Lunch is served in Marostica at a B&R and Ernest Hemingway favourite, following which we will depart for Verona. En-route we can stop in Vicenza and consider a visit of La Rotonda, the masterpiece of Palladio which inspired so much Jefferson and the American architecture. We'll arrive to your hotel in Verona or Venice for final tour night. Start your trip planning here! 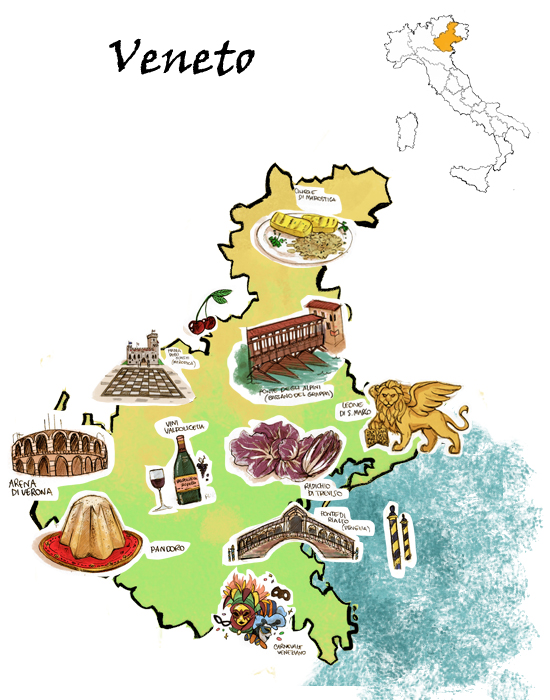 The
journal
The Grammar of Beauty: Andrea Palladio
Andrea Palladio is probably the most influential of all architects, its success and heritage – Palladianism - spanning over more than five hundred years and covering almost all continents.

Read more
Prosecco Hills: the latest and 55th UNESCO Heritage Site in Italy
The beautiful landscape of rolling Prosecco hills has been finally recognised as the latest UNESCO heritage site of Italy and counting 55. This area, yet undiscovered, offers all the paraphernalia of iconic Italian images from vineyards to cypress and oak trees, to medieval little churches to turrets, imposing castles to Renaissance palaces. Come celebrate with us and join one of our walking and biking tours.