Arrival at Palermo airport. Transfer to the hotel. According to arrival time we can take the opportunity to start an orientation walk in the old city center of Palermo.

Guided through the old quarters of Palermo, you will explore some of the city's most sumptuous churches, built in the wake of the Counter Reformation, to attract believers through emotions and theatrically. You'll see how their exuberant decorations are also reflected in the colorful and sensual historic food markets of La Vucciria (from the French bucherie - butcher's shop), the Capo and Ballarò. Wine degustation and local “street” food or welcome dinner at a local restaurant.

Next morning, after breakfast at the hotel, we will head to Monreale to admire the Norman Duomo (Cathedral) decorated on the inside with amazing 24-carat gold mosaics! Then, we continue to the old city centre of Palermo. Here we visit the Palatine Chapel and Hall of King Roger II, the Pretoria Square with its astonishing fountain, Via Maqueda with its Four Corners. Lunch at the Antica Focacceria San Francesco for the best panelle and arancini in town. After lunch a short drive to the charming coastal town of Cefalù, with its stunning Norman Cathedral rich of Byzantine mosaics and a walk in this marine little centre. Back to Palermo.

After breakfast we will drive to Segesta: was once an important town for the Elymians, immigrants from central Italy around the 12th century B.C.E. What is left of the strongly Hellenized town is a grand temple of Doric style - whose dedication is unknown - and a superb open-air theatre. These are two important reminders of the strong Greek presence and influence in this part of Sicily.

To follow we will get to Mozia: a tiny island of the West coast of Sicily, in the natural preserve of Lo Stagnone, Mozia has some of the most remarkable Phoenician remains a temple which is unique in the West (the only similar one may be seen in Syria). What makes the place unique is that, unlike other Phoenician cities, it wasn't built on, and the site has remained as it originally was.

After Mozia we will proceed to the close town of Marsala, driving along the saltpans and Sicilian windmills. Few peolple know the economic and cultural influence a few British families had in Sicily during the 19th century. It all started around 1810. A Liverpool merchant, John Woodhouse, realized that the grapes from the area of Marsala would make for a wonderful sweet wine similar to sherry. Following in his steps, other families, such as the Whitakers, also began producing and exporting the new-born Marsala wine. By the 1820's, these families had already amassed a huge fortune, and Marsala wine was one of the most common desert wines of the European and American middle class and aristocracy.

For lunch we will get to our favorite spot in town, well known for its fish couscous, so good it seduced Giuseppe Garibaldi, who landed here with its Thousands to begin the unification of Italy.

Following lunch, we will enjoy a bit more of the coast before heading to a very special cellar to taste some of the best Marsala wines in the area.

Next day, the site of Selinunte is waiting for us: the archaeological site, set in an incredible scenario, looking towards Tunisia, across the blue sea and fields of wild flowers, boasts Sicily's second largest temple in Doric style, and is awe-inspiring. After lunch we can head to Ghibellina - a town which was entirely reconstructed by famous architects and artists after the 1966 devastating earthquake - the visit will expose you to an incredibly rich variety of 20th century works, among which we find the “Cretto” of Alberto Burri, the largest land art work in Europe: the artist covered the entire town, or better, its ruins with a thick layer of white cement, leaving the streets as they were.

Back to hotel and whether you are an amateur, a gourmet or a passionate food lover, since food is a key to discover and understand Sicily, you'll take your cooking class held by the resident chef: it will be a funny and true Sicilian experience. Sit down then at the beautiful dining room with a view on the green vineyards and into the blue sea at the distance, sip your Nero D'Avola and enjoy the food from the Sicilian soul.

DAY 5 – Supergreeks and the Sicilian Baroque

After breakfast, we will drive Sicily to Agrigento where we visit the Valley of the Temples, a Unesco World Heritage Site, with its imposing range of Greek Doric temples. Michele, our guide will wait for us for a pleasant stroll through the archeological area, regaling the story of how the temples came to be here and how they have remained the world's best preserved. Then, we continue to Piazza Armerina for the visit of the Roman Villa (3rd, 4th century A.D.) at Casale with its 3.500 square metres of mosaic flooring giving an insight into the Roman way of living.

Then, we will drive to Ragusa. Relax at the hotel and then we will gather for belly and mouth pampering at the hotel's restaurant.

Next morning a short drive will take us to Modica, with its splendid Sicilian Baroque architecture. All the South-Eastern Sicily suffered a terrible earthquake in 1693 after which all the town were rebuilt to a magnificent baroque Sicilian Style, unique in the world and all the primary sites, from Ibla to Modica, Scicli to Noto, were named Unesco World Heritage.

Guided by our bright and sweet Concetta we will stroll and stop at the Antica Pasticceria Bonajuto, famous for its chocolate based on old Atzec recipes and then we will settle for a cozy lunch at the Rusticana. In the afternoon we proceed back to Ragusa, with a stop at a local cheese farm for a disclosure of the passion and techniques required to make the special Ragusano DOP cheese.

Later we will be back at the hotel, relax before dinner. We will meet again Concetta for a passeggiata in the old historic centre of Ragusa Ibla, and end sitting down to dinner at Il Duomo: incredible dishes come out the magic hands of starred chef Ciccio Sultano.

Breakfast at the hotel. Departure to Siracusa, once the most powerful Greek colony in Sicily: Archimedes one of the greatest mathematicians of the history was born and lived all his life here. Upon arrival, walk in the old picturesque centre of the town, Orthygia, and visit of the archeological area with its great Greek theatre, Ear of Dionisios, Roman amphitheatre and Latomie (stone-quarries). Lunch in the family run restaurant La Finanziera. After lunch we will proceed to Taormina: Guy de Mauppassant once wrote: ''If someone, staying for only a couple of days in Sicily would ask me: ''what should I see?'', I would definetely answer: Taormina. It is only a sight but a sight that sums up all the beauty a sight can give, from imagination to the spirit.'' After a visit to the imposing Greek-Roman Theatre with unique views over the sea to Calabria and inland to Mount Etna we will check in at the hotel close by and relax with an aperitivo by the pool. This night enjoy a night on your own.

The next day we drive to mount Etna, one of the world's most active volcanoes and the biggest in Europe. To the ancient Greeks, Mount Etna was the realm of Vulcan, god of fire, and the home of the one-eyed monster known as the Cyclops. It has been erupting since several million years. We will pass through several Sicilian villages and visit some old lava flows on the way. During the ascent different kinds of vegetation can be noted. We will reach 2.000 meters (7.000 ft.) where we take a walk together to visit the “Silvestri” craters, and the latest lava flows and craters, enjoying the desert moon atmosphere! Driving down from the mount through a wonderful pine tree forest, and then we'll have a stop at one of the best known vineyards, “Barone di Villagrande”, where we will tour the wonderful property overlooking the sea and the volcano and taste some of their wines with local dishes. Back to Taormina for remaining of the day at leisure. Tonight we'll meet up again for cocktails on the beautiful terrace overlooking the spectacular Taormina bay and the ancient Greek theatre before a farewell dinner whose memory will linger like a taste of the best Sicilian wines.

Next day time at your disposal for shopping and leisure according your flight departure. Transfer to the airport. 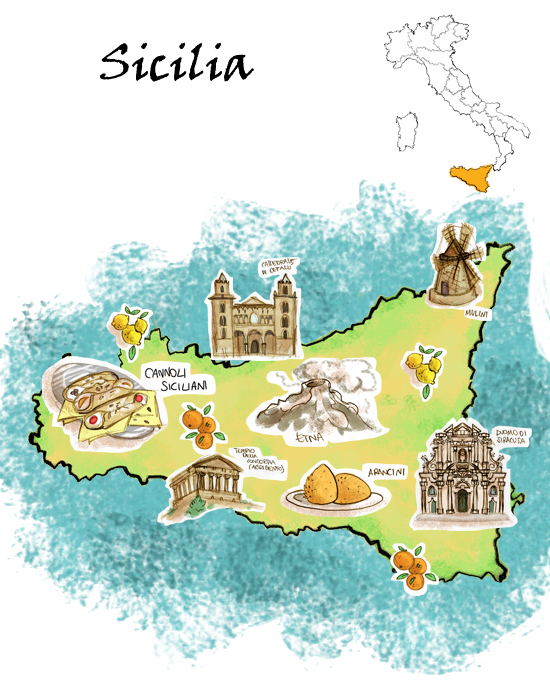