Proud and amazing, elegant and simple, rough yet gentle, between sea and mountains. Welcome to Abruzzo!

The land has a seafaring face, a sinuous body of hills and gentle slopes and a robust back formed by the Appenine chain with its mightly Gran Sasso and the Majella massifs. The sleepy towns and charming villages, in the mountains and hills, retains Romanesque and Gothic signes, while the coast is modern with touches of Art Noveau. Sandy beaches, manicured and tidy, leave space to a southern rocky cliff, where the typical trabocchi (fishermen overflow) alternate to little bays and conjures to make you fall in love.

L'Aquila, the capital of Abruzzo, was born on a saffron flower: it is collected each year in just one night in the Navelli Plateau and it is acclaimed by chefs worldwide. Abruzzo cuisine is a matter of shepherd's taste: barbecued meat on stick, fried cheese in broth, potatoes. Pasta here is singing in the plate: spaghetti (here called maccheroni) are squared cross shaped like a guitar string thus called "alla chitarra". Wines of Abruzzo are no less peculiar with the king Montepulciano, but many others including the not well know but lovely Pecorino, a white wine dote on by sheeps hence its name. 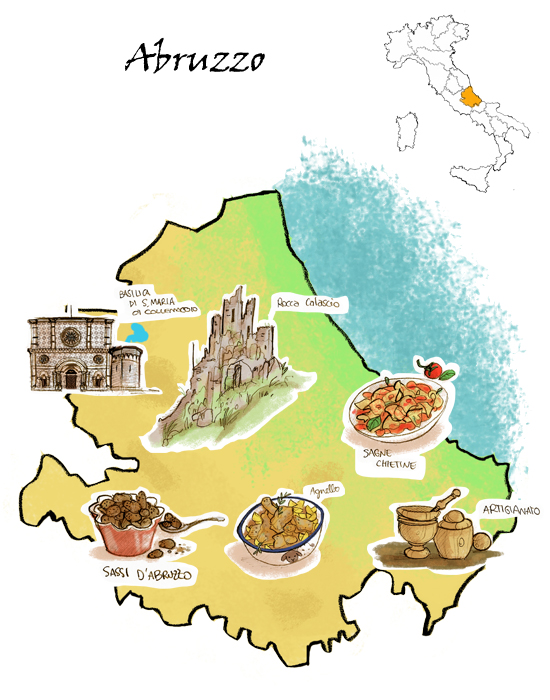