This site uses cookies. By continuing to browse the site, without changing your cookies settings, you are agreeing to our use of cookies
Bologna, Parma & co

Benvenuti to Emilia-Romagna! This region, lying between the Po River and the peaks of the Apennines, the east coast on the Adriatic Sea, stretching from the Po delta to the Marche region, has a split soul. Hedonist, open and cheerful but also intimate and gentle, it houses great treasures all to be discovered. Often unduly neglected by visitors heading straight for Florence and Rome, the cities of Emilia-Romagna have retained their character. Situated along the major trading routes running both north and south, east and west, these towns have been enriched by century long cultural exchanges: Renaissance masterpieces like Parma, medieval historical centers like Bologna and Ferrara (whose entire old center is a UNESCO World Heritage Site), Ravenna, once the capital of the powerful Byzantine Empire, showing off mosaics dating back to the 5th century a.d. (another UNESCO World Heritage Site) and much much more.

Land of abundance... There is no other better expression that can describe this region, with Bologna as its capital: abundance of smiles and cheers, of history and architecture, of music, of genuine industrious creativity expressed at its highest level with Ferrari, Lamborghini, Maserati, Ducati and more in less than 50 km,  and of course, the maximum expression of generosity that you might find ever in any other cuisine. A triumph of first courses where noodles comes in all shapes: tagliatelle, fettucce, fettuccine, pappardelle .. and stuffed pasta share the same distinction with tortellini, tortelli, ravioli, cappellacci, cappelletti, anolini and of course the king of Sunday family lunch: lasagne!  Emilia Romagna is like Santa’s sack when it comes to food: Parmigiano cheese, Prosciutto Crudo di Parma, Aceto Balsamico di Modena, Mortadella, Squaquerone cheese served in a hot piadina…. Prepare your belly for a fest that will last all your vacation and forget the belt home! 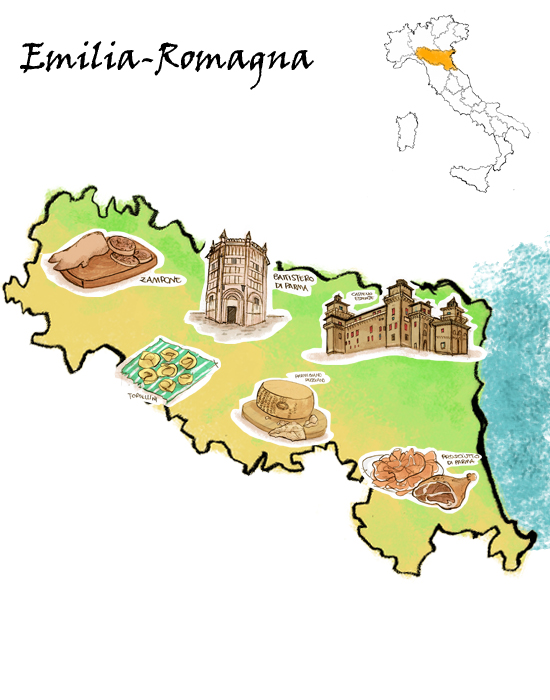